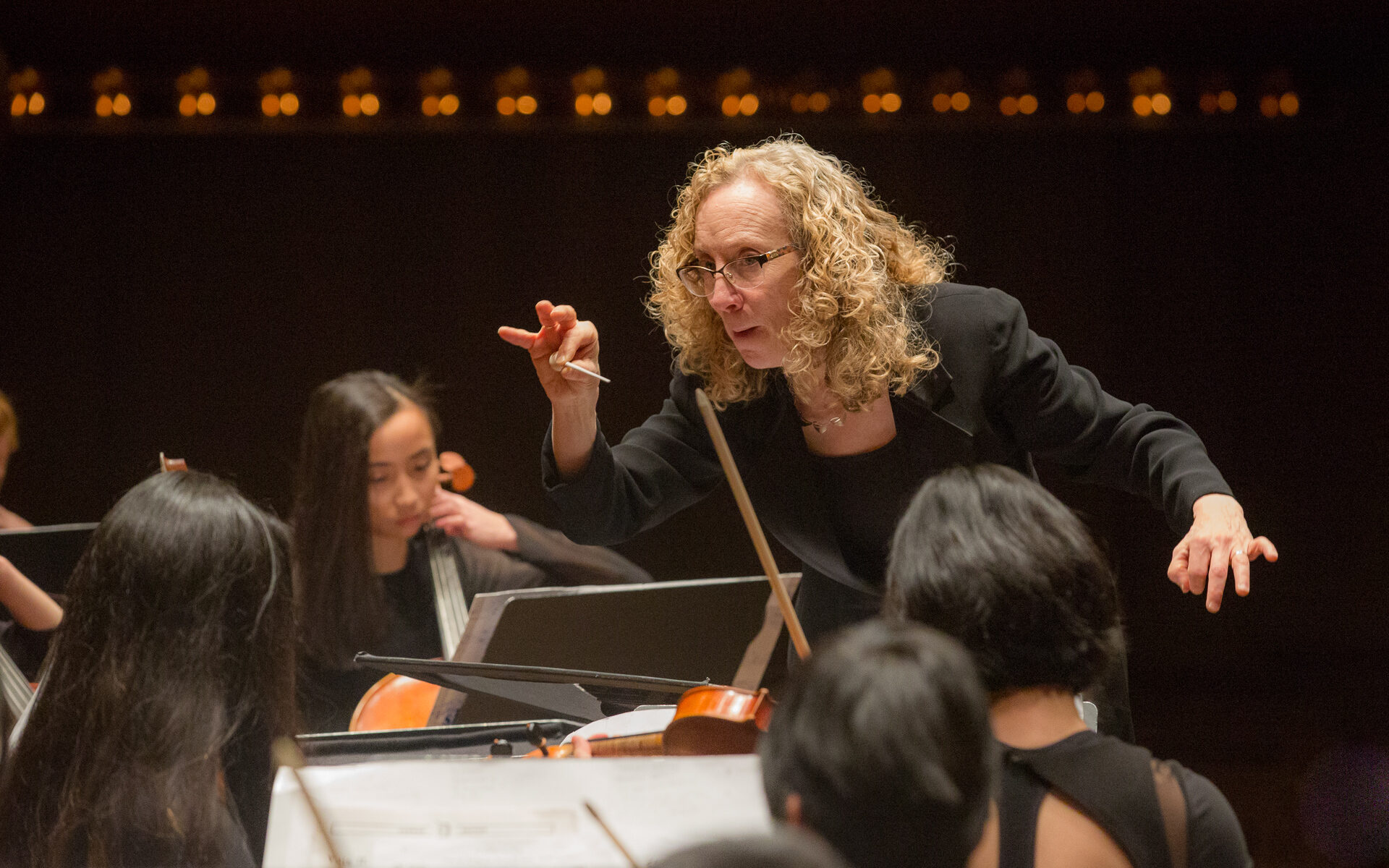 I have the privilege of being invited to shoot several student orchestras that perform annually at a large venue which for the past several years has been Avery Fisher Hall at Lincoln Center in New York.  To be frank, my daughter plays in one of the orchestras, and I actually played in the same orchestra’s when I was growing up, so I have a fondness for the groups.  I know some of the conductors either from having played with them myself as well as playing with them today in other groups.  It is for this reason that I take on this project – as after doing it for several years, this is something that one should think carefully about regarding the amount of work involved!

The day is filled with three rehearsals/sound checks for the three orchestras and then three concerts.   I am given free access to shoot during the rehearsals both from the stage and anywhere in the hall (with proper credentials and prior clearance from the appropriate folks).  That is the good news, and the bad news – as one wants to get as many angles as you can – and that is where it can get tiring.

How does this all go?

The day is grueling if you are to do it right.  I try to get to the hall at least 1/2 hour before the first students arrive in order to make sure there are no access issues and to meet with the stage manager as well as stage hands.  Nothing will ruin a day more quickly than to have access restricted!  (Note:  Be sure to get explicit information on where you can shoot from.  There are some places where you are not allowed to shoot from the stage and they will revoke your shooting permit if you do!)

The schedule is three sound checks of about 45 minutes with no break between – then a 1/2 hour break – then three 45 minute or so concerts with a short intermission between each.

I look at the day as two parts – rehearsal shots and concert shots.  For rehearsal, this is the fun part since I can wander around the stage – and even between musicians depending on the clearance I get from the conductor.  As a classical musician myself, I have a sense as to who will be playing at what point in time (especially if I have played the piece) and move about looking to capture musicians as they play.

What makes this day more enjoyable is that I am not answering to anyone – I can balance my shots between trying to capture all of the kids for the orchestra’s use, but also try to get some shots for my own use.

Time lapse of the three rehearsals.  2.5 hours in 20 seconds @ 3fpm.
Note: You can see me shooting on stage all over the place when not off stage shooting.

The challenges for getting all the kids may not be obvious if you have never shot an orchestra.  For the largest of the orchestras, there are musicians filling the entirety of the stage.  If you are not familiar with it, Avery Fisher Hall has a very large world-class stage.  There are a lot of kids there!  While you would think it would be straight forward to see all the players, when you are standing in their midst, you soon realize that you are gazing out at a lot of tops of heads rather – not really the ideal shots!

So, I plan my rehearsal shots as follows to insure that there are a few shots of everyone’s faces playing in this renowned hall.

First, I run around and shoot from left, center and right balcony – first or second tier – both wide and zoomed.

Second, I shoot from the front of the hall standing on seat arms or backed up to get the whole orchestra at a higher level.

Once these are in the bag – I know I will at least  have a keep sake shot that someone can point to s little head and say – “I was there”.  I think it is critical to shoot wide and capture the iconic architecture for a shot like this – otherwise one could mistake it for another venue, and that takes away from what playing in Lincoln Center is all about.

Next, time for fun – shooting on the stage.  Some venues will prohibit this, so you must be sure that union or other rules allow this. (I made that mistake at another world-class location – not wanting to do that again!)

For large orchestras, you will notice that as soon as you are standing on the stage, you really lose your ability to see faces of the string players.  The inner voices – typically second violins and violas have their backs to the stage and are blocked from view by the first violins and cellos from the sides.

Getting tall helps – I considered a collapsible stool – but for a stage of this size – it is just impractical.  I will stand on a chair as needed, but be sure no one will be upset with you for doing this.  The extra height gives perspective that otherwise can’t be captured.

So, what’s the plan – once I have the shots from the audience perspective (some of which will be duplicated later at the performances) – what shots can I get now that will be uniques.

First, note dress of the musicians.  I tell the conductors that I am taking pictures – and if they want to look like a performance, I encourage them to wear their concert attire as well as ask the musicians to also wear their performance clothes.  Shooting a line of musicians all in black tie looks significantly better than having some jackets off and ties undone.  Same for the conductor – getting a shot in full tails against the backdrop of a major venue is something they will not likely have – so the extra effort to don their performance clothes is worth the incentive of having a shot conducting at an iconic location like Lincoln Center.

If you are lucky and the group all is in concert dress, most any shot can be used as a proxy for the performance and you are likely to get some nice keepers.

There is a balance between getting enough shots for member use and trying to find more artistic shots.  Given that each rehearsal is about 45 minutes in total, which means that there is less than 40 minutes of people on stage and probably less than 30 minutes of actual playing (less for some orchestras) – one must work fast to grab shots that will work.

I have tried this with both on camera and-off camera flash and for now prefer to shoot with available light.  I set white balance to tungsten (so chimping looks better!) and balance high ISO and wide apertures for desired DOF and noise.  For the most part, I am shooting ISO 2000 to 6400 and f2.8 to f4.  This last shoot I used a Canon 5DMkIII with the 70-200 f/2.8 L IS II and 28-70 f/2.8 L II along with a Fuji X10oS.  My routine would be to shoot with the 70-200 and Fuji together, then change lens on the 5D and walk around with that.

After the rehearsals, I take a short break, but have already scouted where I want to be for the concerts.  If there is a soloist, I will pick a location that will work best for that, otherwise, my goal is to get *one* good overview shot of the orchestra in the hall.  The idea being anyone can point to a face and say “I was there!”  This is not art photography, but rather trying to provide a service.

Depending on the venue and what I am allowed to, or have time to do, I may walk to other locations during the performance (of course only when I can do this without disturbing anyone!)

These performance shots will not win awards, but they will make a lot of grandparents happy when they see their grandkids playing in such a place.  After I get a few in the bag, I will throw on a long telephoto and see if I can get any more fun shots.  Sometimes just a tight shot works.

Here are links to all of the shots from this shoot if you want to see more.

https://www.flickr.com/gp/bob_plotkin/73H5Q2/
If you look at the galleries, note that these were not edited for “best shots” like I might for another use, but rather I made an attempt to get shots for each group that captured faces and emotion so that if shared, that grandparent could see who was playing.   Much like capturing the tables at a wedding reception so there is a record of who was there, these are record shots for the players.  I do try to get some more fun shots throughout the day and I do include those as well.